Etusivu / It's not about you!

It's not about you!

Leading with the system in mind

Most leadership programmes focus on developing self-awareness and self-management skills. Indeed, without these, your influence as a leader will be limited. However, there are other forces impacting organisational leadership that go beyond the individual – and many of them are hidden.

Every organisation generates its own information field – a set of organising principles that protect the boundary of that organisation’s culture and behaviours. You come into contact with this field when you join, tune deeply into it as you stay and may feel its edges as you leave. It’s the embedded and embodied culture, the collective effect of all the events, actions and interactions of everybody and everything that has played a part in that particular relationship system.

Most of the rules of belonging are unspoken and often the opposite of the espoused culture. System dynamics emerge and leaders, organisational coaches and consultants may try linear methodologies to resolve them. However, systemic issues require systemic intervention.

Take a moment and think of all the systems in which you’ve belonged. Imagine them rather like a peacock’s tail, where each relationship system – family, educational and organisational – is represented by an ‘eye’ in the tail. In each of these systems your experiences will have varied, from joyful or sad, resourcing or limiting, safe or unsafe. Some of you will have left well, others in more challenging circumstances. Whatever the case, each system will have some ongoing influence over you today.

So, when managing others, you are dealing with great complexity – a field of information made up of multiple individual peacock tails of system membership, hidden dynamics and loyalties. The ability to include this field in your awareness is the first building block of systemic leadership.

But how can leaders make sense of these systemic forces and work with them to develop the kind of leadership that supports organisational health and vitality to emerge?

Over recent years a remarkable methodology has been developed that allows us to explore the complex dynamics that resource or limit leadership and the flow of organisational life. This methodology is called systemic constellations, or simply ‘constellations.’

A constellation is, rather like the ones in the night sky, a living map of the relationship among parts of a system. In a workshop for managers and leaders from multiple organisations it offers a unique opportunity to illuminate the hidden dynamics that can impact individuals, teams and whole organisations.

A member of the group who wants to look at a particular challenge, release a stuck change process or resource any kind of professional issue for themselves, works with the facilitator to set up a living relational map. This is made up of other workshop participants who are placed to stand in relationship to each other, and represent the actual members and parts of the system being explored.

The facilitator works with this emerging information field to illuminate the hidden dynamics behind the issue. In this way, subtle but crucial realignments are made to reveal what’s required to allow flow.

Constellations provide a rapid and accurate way of bringing into sharp focus a map of what is really happening in yourself, your career, your team, division or organisation.

For Simon, leader of an e-commerce business, a constellation helped him quickly reveal the tension between chasing sales and building technology value that his team was experiencing … The constellation showed Simon where his customers really wanted him to focus, so providing his team with a coherent base for future growth.

For Helka, stepping tentatively into a senior role in a technology business, a constellation of the senior team revealed a repeating difficulty for those seeking to find their place in that role. Simply bringing in another experienced manager was not a sustainable solution. What became clear was that someone who’d occupied her role previously had left in very difficult circumstances and neither their contribution nor their leaving had been respected or included in the history. This left a difficulty in the role that others then experienced until they too felt like leaving – or couldn’t occupy their role-authority. This is called a ‘systemic ejector seat.’ Helka returned to the business with a practical solution and an awareness of the need to honour those who came before.

For Ralf, struggling to choose a career path, which truly satisfied his need to align his work and personal values, a constellation opened up a fresh path for him. Within the constellation, representatives for ‘hidden resources’ that were available to him, which he’d previously not seen or considered, emerged and were included.

Everyone taking part in constellation workshops reports surprise at the way in which the process brings feelings, facts and fresh information to life. Even role-playing members who know nothing about the actual details of the issues being explored, find stepping into another’s role to be an illuminating process full of learning.

Participants return to their roles and places within organisational systems with a new understanding of the unspoken rules of belonging in systems and with fresh paths to travel – both as individuals and as leaders of relationship systems.

Learn more about systemic constellations in our Integrated Leader programme. The programme is an opportunity for experienced managers and leaders with a curiosity for self- and system understanding to attain new depths in both professional and personal fields. 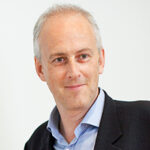 John is a leadership coach, constellations facilitator and trainer of other coaches. Working at the meeting point of personal, professional and organisational system dynamics, he supports individuals, teams and whole businesses to establish a clear sense of themselves and their place in their relationship systems. Since 2011, John has been visiting faculty at Henley Business School introducing systemic coaching and constellations to executive students on Henley’s MSc in Coaching and Behavioural Change programme.